Receiver in canal (RIC) hearing aids are available in different styles. Its new discrete design feature is made for everyday use and enjoyment. Get to know its price & benefits in detail. Call us today to book your appointment.

You can purchase the latest hearing aids at a fair price through HearingSol, If you need any assistance or you have a query regarding Receiver-in-canal (RIC) Hearing Aid or Hearing Loss, feel free to call us at 1800-121-4408. We are always here to help you.

RICs can be quickly and easily adjusted and provide a high degree of wearing comfort, discretion, and appropriate amplification. However, in this variety of hearing aids, the microphone and receiver are not kept in the same container here.

Because of this, it leads towards the prevention of vibrational response or whistling effectively. hence It increases device performance positively. The Receiver in canal (RIC) hearing aids loudspeaker or the receiver is located outside the housing or main unit and positioned at the end of the thin ear wire.

Which connects both receiver and main housing unit so that the loudspeaker can be placed near to the eardrum. Since generated sound only has to travel a very short distance with lower transmission loss. So, it requires less sound energy (and battery power) to produce a very superior and clear listening experience.

RIC and RITE both kinds of the device are wired receiver hearing aids. Where the receiver is at the end of the wire, connected to the outer main unit and is placed in a position in the ear. This is the main reason so that RIC devices are also known as RITE hearing aids. Though they have similar models and features then also they are different from each other due to their placement of the receiver.

According to Widex, in the case of Receiver in the canal (RIC), the receiver (the thing at the end of the wire) of the hearing machine goes into your ear canal. But in Receiver in the ear (RITE), the receiver actually lives in the portion of the earmold so that it sits in the outer ear, and not in the ear tube. A sound tube runs from that receiver along the inside of the piece that goes into your ear canal.

Thus, they are just named differently by different manufacturers in most cases (but in others, they are not) hearing aid companies and their confusing designations.

RIC hearing aid separates all the necessary components into two major sections. The first section is a case behind the ear that holds the aid’s amplifier and microphone. while a small bud that contains the receiver is used inside the ear canal is called the second section. A small tube that connects the receiver to the main case. They are smaller than standard BTE models, but are easy to maneuver and can still house a variety of features. 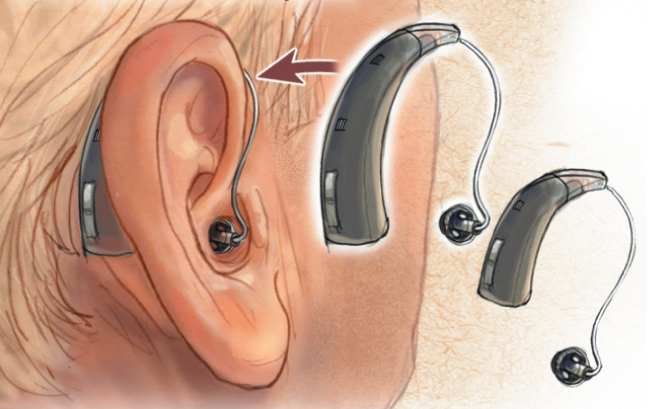 The latest technology which is available, and used in the Receiver in canal (RIC) hearing aids, such as the wireless connectivity feature, and it provides the user a higher level of comfort that is taking today’s RIC devices to new heights of popularity among users. Receiver in canal (RIC) hearing aids houses either a size 10 (Yellow), size 312 (Brown) or size 13 (Orange) hearing aid battery depending on the style and size selected in this device.

The typical lifespan of a size 10 battery is between 3-5 days, size 312 battery between 5-7 days and size 13 battery between 10-14 days. This time of the average lifespan of these batteries can vary depending upon the number of hours per day used, and also depends on the ear machine is worn and used by the user, the severity of Hearing Loss in the ear, and also the technology level of hearing aid that is used in these devices plays a major role in it.

You may observe the following features :

RICs are a type of open-fit device that uses a thin plastic “micro” tube that extends from the body of the hearing aid (housed behind the ear) over the outer ear and into the ear canal. A small, soft tip of this device’s receiver sits inside the ear canal but without sealing it. This way, air, and other natural sounds can continue to flow to the ear canal naturally, hence this it reducing feelings of being “plugged up”.

The main problem of a hearing device which is feedback and occlusion tends to be much less of a problem with RIC devices like they have happens with other types of hearing aids used by the user. With the ear canal remain open while using the Receiver in canal (RIC) hearing aids, the wearers generally report a more natural sound, which is judged to be more comfortable.

As the device’s receiver is located inside the ear canal, it gives more natural and crispy sound quality. That allows the listener to experience both together, the natural sound and sound which comes from the receiver. This type of device is a great choice for listeners with mild to moderate hearing issues because it amplifies high-pitched tones exceptionally well.

If your loss is in the mild to the moderately severe range and you have the ability to manipulate small objects, these hearing machines may be a good option for you. The RIC provides the facility to change the power levels. Which improves the working of this device impressively. Also, this feature makes it useful for a longer period of time. This means you may continuously use it without replacing it if your hearing deteriorates in the future.

You may enjoy the following benefits:

This is a very considered and major question asked by new buyers for almost every kind of hearing aid device. because the buyer always wants to know that the comparison of the real price of the hearing aid either fits in their budget or not?

Because the judgment you take in terms of investing money for hearing aids gets you a clear vision about what you are getting back? while the huge amount you are paying for these devices. Because the amount can vary in terms of model, technology, features, and ease of service they provide to you.

Hence, the price of standard RIC may vary as per different models and companies. Thus it ranges from approx. Rs.25000 per unit up to Rs. 250000 per unit. Mostly hearing machine manufacturers provide a variety of Receiver in canal (RIC) hearing aids.

If you are planning to buy a RIC hearing aid, buy it at a fair price from HearingSol, and if you are an Indian, you can also check out the cost of the hearing aids in India.

To get any type of consultation or advice you can book an appointment or call our toll-free number 1800-121-4408 where our hearing specialist will help you in all ways.