HomeFAQsWhat will an audiogram look like if one ear is better than the other and it’s not masked during a hearing test?

What will an audiogram look like if one ear is better than the other and it’s not masked during a hearing test?

An audiogram is a document that we use in practice to record a hearing test. In other words, it is the hearing test graph that represents the ability of hearing and which can describe as a picture. It is used to determine if a person is having hearing loss and if so then how bad that loss is. 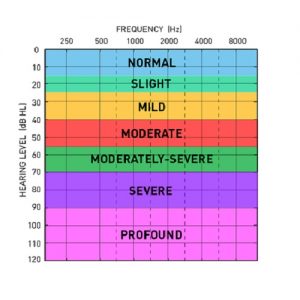 You can purchase the latest hearing aids at a fair price through HearingSol, If you need more information or you have a query about Audiogram Hearing Test or Hearing Loss, just give us a call on +91-9899437202. We are always here to help you.

A hearing healthcare professional compares some test that can help to decide the hearing loss of a patient. The result of the hearing test is often displayed in the form of an audiogram.

How to read an audiogram?

If we see the audiogram we will notice that there are many colors and symbols on the graph. Each of these marks is important. Every audiogram has a key on the page that helps to understand it.

What will an audiogram look like one ear better than the other?

If in the audiogram there is a shadow curve of parallel lines, also called a mirror audiogram then it means that better ear was not tested and the crossover from the poorer ear being tested. Basically, it means that one ear is tested twice instead of the other ear.

Masking dilemma occurs when there is a conductive type hearing loss in both ears, which is moderate to severe. The dilemma is that an adequate force to mask the non-test ear crosses over the testing ear and invalidates the doorsteps.

Adequate masking is too much. There are several “workarounds” to this masking. When one is masking air conduction if one can use insert earphones.