Top Deaf Influencers Who Changed The Perception of Hearing Loss

Deafness is a condition that causes an individual to lose their hearing. It can be due to exposure to noise, illness, or some physical trauma. There are so many technologies that allow deaf people to be able to hear. But these technologies are still considered controversial in the deaf community. There are few Top Deaf Influencers who encourage others.

You can purchase the latest hearing aids at a fair price through HearingSol, If you need any assistance or you have a query regarding Deafness or Hearing Loss, feel free to call us at +91-9899437202. We are always here to help you.

If we search for the most famous deaf person, Helen Keller tops the list. Born with sight and hearing, she was 18 months old when she contracted a terrible illness which left her blind and deaf. Keller was taught to communicate by Anne Sullivan and they remained close friends and colleagues until Sullivan’s death in 1936. Later Keller went on to become a renowned speaker, author, and pioneer for deaf rights.

There are several deaf actors and actresses such as Marlee Matlin, who became deaf at 18 months of age. She won an Academy Award for her performance in the movie “Children of a Lesser God”. Her character was recreated by Deaf actress Phyllis Frelich, who won Tony Award for her performance in the on-stage version of “Children of a Lesser God”. Some other famous deaf people were Shelley Beattie, Shoshannah Stern, Curtis Pride, Linda Bove, etc.

Thomas Alva Edison is America’s Greatest Inventor. He is the inventor of electric power generation, mass communication, sound recording, and motion pictures. These inventions, which include the phonograph, the motion picture camera, and the long-lasting, practical electric light bulb, had a widespread impact on the modern industrialized world.

He had severe hearing issues in both the ears due to scarlet fever when he was 12. His hearing loss was hereditary, as his father and son experienced the same hearing loss.

He often joked about “benefits of hearing loss”, as he believed that his hearing loss has helped him to be a better scientist as he can better concentrate on his work. This made him more solitary.

Helen Keller was an American author, political activist, and lecturer. She was the first blind-deaf person to earn a bachelor of arts degree. She was also an advocate of people with disabilities. As a member of the Socialist Party of America, she campaigned for women’s suffrage, labor rights, socialism, and antimilitarism.

Helen Keller was born with sight and hearing, she was only 19 months old when she contracted a terrible illness which left her blind and deaf. She was taught to communicate by Anne Sullivan and they remained close friends and colleagues until Sullivan’s death in 1936. Later Keller went on to become a renowned speaker, author, pacifist, and pioneer for deaf rights.

Marlee Matlin, actor and film producer, author, and activist was diagnosed with profound hearing loss at 18 months of age due to the malformed cochlea. She began to learn sign language when she was at the age of 5. She won an Academy Award for her performance in the movie “Children of a Lesser God”. Her incredible in film and television has resulted in a Golden Globe award, with two additional nominations, and four Emmy nominations. She is also a prominent member of The National Association of Deaf.

Bill Clinton was an American politician who served as the 42nd President of the United States. Prior to the presidency, he was the governor of Arkansas and the Attorney General of Arkansas.

Former President of the US was found to be suffering from a moderate loss of high-frequency hearing while undergoing an annual physical checkup. He faced difficulty in hearing in crowded rooms as well as noisy political rallies. His hearing loss was due to the use of hunting rifles, listening to rock and roll as a youth, and political rallies.

Now he uses completely-in-the-canal (CIC) hearing aids that help him to hear even in noisy environments.

Derrick Coleman is an American retired Basketball player. He is the first deaf offensive player in the NFL. His hearing disorder was diagnosed when he was 3 after his parents noticed his speech delay. As he uses hearing aids for both ears. He was bullied while growing up, from classmates and even teachers. He started playing football while he was in high school and learned to read lips on the field and played football at UCLA. And later, he went on to play for the Seattle Seahawks in the NFL.

Eric Clapton is an English rock and blues guitarist, singer, and songwriter. He has been referred to as one of the most important and influential guitarists of all time. He has been the recipient of 18 Grammy Awards, and the Brit Award for Outstanding Contribution to Music.

Though he was a legendary guitarist, he developed hearing loss and tinnitus in both his ears as a result of years of performing loud concerts. He notes that now he listens to soft classical music as he wants to preserve the hearing he has left.

Halle Berry is an American actress. Berry won the 2002 Academy Award for Best Actress for her performance in the romantic drama Monster’s Ball (2001). As of 2018, she is the only woman of African American descent to have won the award. Berry was one of the highest-paid actresses in Hollywood during the 2000s and has been involved in the production of several of the films in which she performed.

She is an actress with an 80% hearing loss in her left ear. It was caused by being hit in the head by her boyfriend. She now strives to raise awareness of domestic violence among people, especially women. 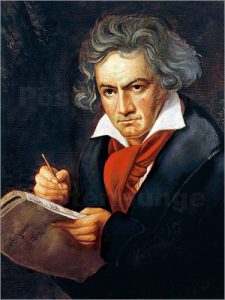 One of the most famous musicians and composers who began to lose his hearing at the age of 26. By the time he was 44, his hearing was completely gone. The cause of the hearing loss is still unknown. But the cause is thought to be an illness, lead poisoning, or lesion of the inner ear. At the early stages, he used an ear horn to assist in hearing. His hearing loss progressed to the point of deafness.

At one of his performances, he had to turn around to see the applause as he was not able to hear anything. As his hearing loss became more severe, he began using paper to communicate with others. People used to write down what they wanted to say or ask him.

William Shatner is a Canadian actor, author, producer, director, and singer. In his seven decades of television, Shatner became a cultural icon for his portrayal of James T. Kirk, captain of the USS Enterprise, in the Star Trek franchise.

The famous actor who portrays Captain Kirk in the Star Trek series suffers from tinnitus. He attributes the onset of his tinnitus to an explosion incident that occurred on the set of Star Trek series. American Tinnitus Association (ATA) supported him. He advocates for research on a cure.

Pete Townshend is a famous musician, songwriter, and guitarist for the rock band, “The Who”. He has hearing loss and tinnitus in both ears. The cause for that is thought to be the result of loud noise exposure while performing at concerts and wearing earphones in the music studio while recording.

He helped to fund a non-profit hearing advocacy group H.E.A.R.(Hearing Education and Awareness for Rockers). After an extensive amount of time playing guitar for the concerts, his hearing loss and tinnitus have continued to progress.

Lance Allred was born with over 75% hearing loss and went on to become the first legally deaf basketball player in NBA history. He competed in the 2002 World Deaf Basketball Championship in Athens, Greece, for Team USA and led it to second place. He later played basketball at the college level in his home state of Utah and made his debut in the NBA in 2008 with the Cleveland Cavaliers.

Allred recently wrote a memoir called “Longshot: The Adventures of a Deaf Fundamentalist Mormon Kid and His Journey to the NBA”. As he was born Deaf and wears hearing aids in both ears. He faced some adversity from teachers as well as coaches throughout his career, hearing loss is the reason for that.

Now he is a well-known example of someone who overcame hearing difficulties in sports. Allred speaks to students around the country and organizes basketball camps for deaf and hard of hearing teens in his home state i.e. Taylorsville, Utah.

Heather Whitestone lost her hearing ability due to an ear infection when she was just 18 months old. She was the first-ever deaf woman to win the Miss America title in the year 1995. When the first runner-up was announced, she could not hear the host Regis Philbin but could read his lips. Surprised, she looked to her fellow contestant for confirmation that she had won.

As Miss America, she showcased her S.T.A.R.S program across the country.  S.T.A.R.S. stands for “Success Through Action and Realization of your dreams.” It has five points which are: positive attitude, belief in a dream, the willingness to work hard, facing obstacles, and building a strong support team.

The character of Marlee Matlin was recreated by Deaf actress Phyllis Frelich, who won Tony Award for her performance in the on-stage version of “Children of a Lesser God”. She was elected to the ninety-member Screen Actors Guild (SAG) Board in Hollywood, the highest policy-making body in the entertainment industry in 1991. She was the first deaf actress to be recognized in the United States. She has drawn critical acclaim on their aesthetic art of American Sign Language while acting in the theatre.

Katie Leclerc, 31, was born in San Antonio, Texas, United States of America. The actress who worked in the movie “Veronica Mars” has Ménière’s disease, which contributed to her hearing loss. She also appeared on television series like Fashion House and The Big Bang Theory.

Hearing loss can affect anyone regardless of who you are and what you do. People who are mentioned above proved that if you are determined to achieve something big in your life, then nothing can stop you from getting that. Not even a physical disability such as Hearing Loss. Just believe in yourself and your dreams to lead the path towards success.

You can purchase the latest hearing aids at a fair price through HearingSol, If you need any assistance or you have a query regarding Deafness or Hearing Loss, feel free to call us at +91-9899437202. We are always here to help you.