HomeFAQsHow do I diagnose speech sound disorders, such as articulation and consistent and inconsistent phonological disorder?

How do I diagnose speech sound disorders, such as articulation and consistent and inconsistent phonological disorder?

As children learn to talk they produce some sounds in the wrong way. Most of the children able to say all the sounds of English by the age of 8. A child who does not say so is expected to have a speech sound disorder.

To make sound some children have trouble in controlling the tongue. Childhood apraxia of speech is not a common problem widely. But it can cause speech problems.

There are various ways to diagnose different types of speech and sound disorders.

If you need more information or you have a question regarding Speech Sound Disorder, you can discuss it with our HearingSol healthcare professionals, just give us a call on +91-9899437202. We are always here to help you.

Your child is suffering from speech sound disorders if he has.

Diagnosis of Speech and sound disorder: 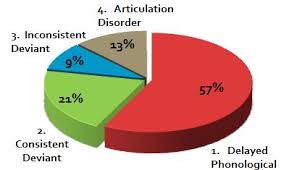 It is a condition in which the muscles use for speaking are weak or they are facing difficulty in controlling them.

A Speech-language pathologist diagnoses your speech to find the type of dysarthria and also provide the patient with required speech therapy.

Dyspraxia is a disorder in which a person having trouble with movement. It is not because of muscle weakness. The brain has a problem in moving the body parts which need for speaking such as lips jaws etc.

Another name of dyspraxia disorder are

Speech sound disorder is based on different kinds of factors. Some of the factors are-

It is a delay in child pronunciation or error in pronouncing the word. A speech therapist checks. How far the articulation disorder affect the kids?

Consistent and Inconsistent speech disorder associated with literacy difficulties occurred in both reading, writing, and spellings.

It is a type of speech or sound disorder and child have an inability to forming words correctly. However, age is an important factor in the diagnosis of a phonological disorder.

A speech therapist asks the patient to say different words. And then depending on the test, a speech-language pathologist uses an Arizona-4 test. This test helps to eliminate different disorders except for phonological disorder. These other disorders include hearing impairment, Neurological problems, and cognitive difficulties.