Get the Best Treatment for Speech Disorder or Impairment

If you or your loved ones suffering from a speech disorder, language disorder, speech impairment or any kind of speech problem then you are in the right place. At HearingSol, you will get the perfect treatment for speech-related diseases by the best speech specialists who will not only cure your problem but will also help you in developing speech and building your confidence. As said, it’s better to be safe than to be sorry, so call on our toll-free number +91-9899437202 today and consult to our speech pathologist.

REQUEST A CALL BACK

Speech disorders can be defined as a type of communication disorder. It is also known as speech impairments or speech problems. This disorder affects the way a person creates sounds to form words and normal speech is disrupted. There are certain voice disorders which can be considered as speech disorders such as stammer, stutter, lisps, etc. If anyone is not able to speak at all, then he/she is considered mute.

How Speech Disorder Affects You?

Some people having speech disorders know what they want to say but are unable to articulate their thoughts. Such situations may lead to low self-esteem as well as the development of depression.

If you need any assistance or have a question about Speech Disorders, you can consult our HearingSol  experts with your problem, feel free to call us on +91-9899437202. We are always here to help you.

Speech disorders can affect anyone, adults as well as children. Early treatment can help to correct these conditions but first, it’s important to determine the magnitude and type of speech disorder for its proper cure.

According to a source, Only 5% to 10% of the overall population contain completely normal speaking skills and its difficult to classify either the person has normal or disordered speech. You can classify speech disorder in 3 ways:

You can classify your speaking ability as Phonemic and Phonetic by pronouncing these words:

If the patient can produce the correct speech /s/ sound by placing tongue, teeth and lips correctly and easily then the speech is normal. If they obtain difficulty or tongue depressor while producing speech /s/ sound then they have a speech disorder.

If the patient can not speak in spite of their will or no sound ever produced then they can be classified as mute or dumb.

It is a motor speech disorder. Apraxia is caused by damage to the parts of the brain related to speech and communication i.e due to stroke or progressive illness.

There are various types of apraxia related to the communication issue. It influences the engine programming framework for speech production.

For example, pronouncing “potato” becomes “topato” or then “totapo”. In this condition, speech generation is very difficult.

The condition is, particularly with sequencing and sound production but sometime the common phrases may be spoken without any effort.

However, there is a disturbance in the cerebrum which sends the flag to the muscle for the development. This is important to deliver the sound.

The issues can lead to enunciation while additionally inflection and talking about pressure and rhythm errors.

It is a motor speech disorder or paralysis which can affect the muscles of the mouth, face or respiratory system. The muscles become weak or have difficulty moving.

It can make talking really difficult. People may experience difficulty in understanding the speech of the affected person. Speech-Language pathologists can help.

Dysarthria if not treated can result in total loss of speech determined as Anarthria.

Dysarthria can also be produced by neurological injury which might hinder the control over the tongue, throat, lungs, and lips.

Swallowing difficulty(Dysphagia) is the effect present in dysarthria. You might experience the following effects in dysarthria:

Children as well as adults, both can have a problem with producing speech or sound clearly. And the unclear speech might be difficult to understand.

They are termed as articulation( phonetic) disorder and phonemic disorder. The articulation disorder is categorized as difficulty in producing sound physically most preferably by kids.

Sounds might be overlooked or adjusted throughout the speech. A toddler may substitute sounds (such as “wabbit” instead of “rabbit”) or add irregular sounds to the words.

While figuring out how to talk, kids will regularly show some articulation issues. However, they are relied upon to “come out of this disorder” by a particular age. For that, they need articulation therapy.

Where phonemic disorder is categorized as difficulty in learning one word with different sounds. e.g. fi’ for fish or ‘at for cat and puh-lane for a plane.

Stuttering or Stammering influences speech familiarity. It starts in childhood and, in some cases, it keeps on going all through life. 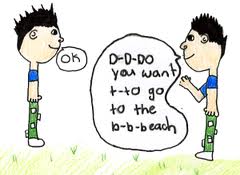 In this disorder the flow of speech is interrupted by the unwanted repetitions and prolongations of sound, additionally called “disfluency.”

Many individuals deliver brief disfluencies every once in a while. A few words are rehashed in stammering and others are gone before by “um” or “uh.”

Disfluencies are not a big issue. But, it can delay communication if a person delivers them in excess.

It approximately affects 1% of the adult population. For severe stuttering, long-term therapy and hard work are required to decrease the occurrence of disfluency.

Voice disorder is an impairment that involves abnormal pitch, loudness, and quality of sound produced by larynx which affects the speech production.

Cluttering is the speech and communication disorder with a rapid rate of speech having poor syntax and grammar makes the speech difficult to understand.

Cluttering are most often confused with stuttering but they are distinct in their own ways. Shuttering is categorized as repetition and prolongation of sound while speaking where cluttering makes the communication hard with the disorganized words while speaking.

Some of the causes include:

In some cases, Speech disorders may be hereditary which can develop over time.

The symptoms of the speech disorder depending upon its cause are several. Some of the common symptoms are:

There are so many tests available for the diagnosis of speech disorders. Some of them are mentioned here.

The test evaluates the pronunciation clarity in children between the ages of 2 and 7 and the results are compared with the standardized norm for that age.

This is a five-minute test which uses various exercises to assess the child’s speech. It’s a unique test as it was designed for the trained non-professional workers.

Before thirty-four sound elements were administered to over 1500 kids, all were two and one-half to six years of age. The four sounds were eliminated from further study.

In their production of the remaining 30 sounds, no significant differences were noted. The observed data in the pronunciation of the 30 sounds were combined for all kids and displayed in a percentile rank format for each age category.

The kids with the fifteenth percentile as the cutoff point were referred to as abnormal children. Test-retest reliability was 0.95. The Application of the test to large populations of children is done nowadays to diagnose a child with a speech disorder.

This test was created by a neurodevelopmental pediatrician ” James Coplan” in 1993. The ELM scale is an instrument for language screening for infants of 3-4 months. It divides 43 items(like a laugh, alert to voices, pointing on objects, etc) into 3 parts

The examiner examines child behavior in response to these items and prepares the recording form. The recording form contains a pass/fail rating and score on the basis of pass/fail method and point scoring method performed. It determines a child’s language development. It also identifies delayed speech or language disorders, if any.

Early language milestones (ELM) scale kits are available in the market in Rs 13,820 for examining the progress of the child having the speech delay or disorder.

The Peabody picture vocabulary test was administered in 1959 and it estimates the person’s verbal intelligence. Since then it has been revised many times.

The PPVT was designed for the use of child and adults from 2½ to 40 years. The person will listen to words and choose pictures to describe those words. The obtained score can be converted into percentile and named as IQ Score.

These tests are also been using in the rehabilitation process for the person with multiple physical impairments, but hearing and vision ability intact.

People with severe intellectual disabilities or blind won’t be able to take this assessment.

Others get improved with speech therapy but others require medical attention by a specialist in phoniatrics.

Treatment varies according to the type of disorder. A speech therapist will help you in muscle-strengthening exercises for the face as well as throat.

You’ll learn to control your breathing while speaking. Muscle-strengthening exercises along with controlled breathing help to improve the way words sound. This helps to learn the ways to practice smoother, and fluent speech.

Nervousness, embarrassment, or depression may be experienced by people with speech disorders. School-aged children are often placed in a special education program who experience speech disorder.

Talk therapy will be helpful in these situations as it will enable the sufferer to cope up with the condition. It will also suggest ways to improve the outlook of your condition.

More than 800,000 of the students placed in a special education program are suffering from speech and language impairment. And this number does not include any children having deficiency lower in speech disorder i.e deafness.

A therapist will be the best person to discuss the condition. Antidepressant medications may be helpful if the depression is severe.

There are some other treatments available which include correction of organic conditions as well as psychotherapy.

Suffering from speech disorder is a negative social effect usually among youngsters. The person with the disorder is often target as being bullied by their mates and they feel shameful in having a speech therapy which leaves the disorder untreated.

Untreated speech disorders, sometimes become the reason for the person to experience a great deal of anxiety in their daily life.

As time passes, this anxiety may trigger anxiety disorders or even a phobia of speaking in public as well as social interactions. Some of the signs of anxiety are:

In this cases dealing with anxiety is very important in which meditation and psychotherapy might help to some extent.

Some of the natural remedies for anxiety symptoms are:

Early intervention for anxiety can be helpful in preventing the development of anxiety disorders or any such phobias. Treatment options include talk therapy, as well as anti-anxiety medications, only prescribed by doctors.

It is often used synonymously to the Speech disorder. But both are distinct to each other and occurs to children before the age of three or later.

A Speech disorder is referred to problems witness while producing the sounds of speech or with the quality of voice. Whereas language disorder is the impairment of either understanding words or being able to use them.

And it has nothing to do with speech production. Language disorder involves grammar, syntax(meaning) and other aspects of language.

Some of the potential risk factors for developing language disorder are:

The outlook readily improves for people seeking early treatment. This helps to prevent a speech disorder from getting worse.

The outlook for people with permanent disabilities depends upon the severity of their disability and cause of the disorder.

You can improve your speech with the help of speech therapy. Early treatment will definitely give better results.

If you have any query related to speech problem, call on our toll-free number +91-9899437202 or you can schedule a visit at HearingSol Clinic.