Eustachian tubes are narrow tubes that link your middle ear to the upper throat. These tubes are responsible for equalizing ear pressure and draining fluid from the middle ear. These tubes are usually closed except for when you chew, swallow or yawn. 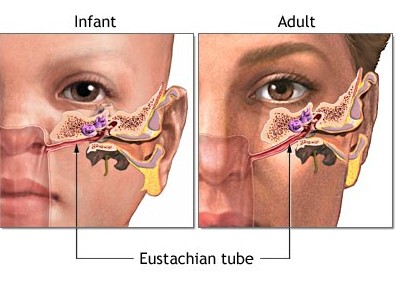 The Eustachian Tube in infant and adult

You can purchase the latest hearing aids at a fair price through HearingSol, If you need any assistance or you have a query regarding Eustachian tube dysfunction and Hearing loss, feel free to call us at +91-9899437202. We are always here to help you.

The eustachian tubes in children are at a more horizontal angle than in adults. This tube enlarges and becomes more verticle with increasing age to provide better drainage. This is why children are more likely to suffer from eustachian tube dysfunction.

What is Eustachian Tube Dysfunction (ETD)?

Have you ever felt that your ears are blocked and because of this you couldn’t hear? Have you ever had popping or clicking sound in your ear? Are you having trouble with keeping your balance? 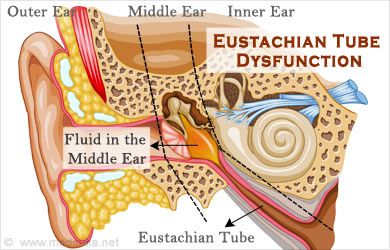 When the Eustachian tube experiences problems, then it gives rise to what is called a Eustachian tube dysfunction. That is when the tube is either fails to equalize pressure or is unable to clear mucus from the middle ear.

In medical science, the chronic blockage of the Eustachian tube is called Eustachian Tube Dysfunction (ETD), as commonly referred to by professional doctors and medical practitioners around the world.

How ETD Is Caused?

There could be many factors that cause Eustachian Tube Dysfunction (ETD) in individuals, especially in young children aged 1 to 6 years old.

These young children are more at risk of this type of problem because of the reason that they have very narrow Eustachian tubes than older people.

A point of concern is that if chronic ETD remains untreated, then it could even lead to loss of hearing in the affected children. Thus, extra care is necessary to deal with such problems.

What Are ETD Symptoms?

The Eustachian Tube Dysfunction symptoms include:

If you are having any of the above symptoms then consult your doctor. Your doctor will confirm whether you have ETD or not.

In case you have ETD than the next step of your doctor is to diagnose it.

How ETD Is Diagnosed?

There are various methods to diagnose the causes of eustachian tube dysfunction. First of all, your ENT specialist doctor will ask you about your pain, hearing changes, and other symptoms that you are going through.

After reviewing your medical history or symptoms, your doctor will begin to assess the use of several different instruments. Some of which are:

These tests are pretty simple and none of these cause any kind of harm or discomfort. And if there are any serious problems, and Imaging tests like CT Scan Or MRI might be ordered to look for the tissues that are blocking the tube.

How ETD Is Treated?

Eustachian Tube Dysfunction Treatment depends on the severity and cause of the condition. Usually, ETD resolves within a few days without treatment.

If the Symptoms of ETD don’t go away within a few days then following are the various treatment to cure Eustachian tube dysfunction:

If the symptoms of ETD are bothering you, some simple home remedies may help. These remedies are very effective for minor symptoms especially if they are not caused by an illness.

Some of the Eustachian Tube Dysfunction home remedies are:

To resolve minor ETD symptoms in infants, give the baby a bottle or pacifier to suck.

If your symptoms are not going away through home remedies then it might also be possible that the symptoms are caused by a bacterial infection.

If the symptoms of ETD is caused by a bacterial infection your doctor may prescribe:

These are some medication treatment for Eustachian tube dysfunction. And if your symptoms are not going away with these medications than surgery is the only method left to cure ETD.

The primary goal of surgical treatment of the Eustachian tube is to bypass the tube to ventilate the middle ear. This surgery can restore hearing, relieve pressure sensation in the ears, and reduce the possibilities for middle ear infections in the future.

Surgery for Eustachian Tube Dysfunction Include:

Prevention is always better than cure and in the case of Eustachian Tube Dysfunction, the tools for prevention is simple.

To prevent pain caused by repeated changes in air pressure, swallow or yawn regularly. Air pressure changes in situations like taking off in a plane or driving up a steep mountain.

In some cases, taking a decongestant before flying or diving can help in its prevention. A decongestant like Pseudoephedrine.

If you feel air pressure related ear trauma than give it some time to heal. A ruptured eardrum naturally gets better by itself in a few days. If symptoms persist, immediate concern to an Otolaryngologist.

You can purchase the latest hearing aids at a fair price through HearingSol, If you need any assistance or you have a query regarding Eustachian tube dysfunction and Hearing loss, feel free to call us at +91-9899437202. We are always here to help you.