How Does Head Trauma Cause Hearing Loss?

Traumatic brain injury is an injury to the brain, not to chronic or inborn nature, resulted due to an external physical force which may produce a different state of consciousness, that result in a reduction of mental abilities.

You can purchase the latest hearing aids at a fair price through HearingSol, If you need more information or you have a query about Head Trauma Cause Hearing Loss, just give us a call on +91-9899437202. We are always here to help you.

Symptoms of hearing loss caused due to head trauma

Some facts about concussions

A concussion is a type of traumatic brain injury(TBI) which is mild and caused due to bump or jolt to the head or neck. A concussion also causes due to the jarring of the head or the violent movements or also due to sound blast in which the sound pressure is so high that it can damage your brain.

Effects on the hearing of Traumatic Brain Injuries, Concussion

Due to the sudden and violent nature of the injury, head trauma can harm the hearing path. Damage may occur at any point between the external ear and the hearing cortex in the brain.

Therefore, there is not a specific type of hearing impairment that occurs with TBI, but there are various types of complex symptoms that can be challenging to cope with the injured person.

Even an injury can result in loss of light in the ear as an injury or changes in the hearing path to the brain. Although some of these changes are reversible, others are not unfortunate. These changes may include a broken eardrum, damage to small bones of the middle ear, damage to internal ear tissues and membranes and disruption of blood flow to the cochlear nerve. Internal hair cells are particularly vulnerable to damage.

These changes may include a broken eardrum, damage to small bones of the middle ear, damage to internal ear tissues and membranes and disruption of blood flow to the cochlear nerve. Internal hair cells are particularly vulnerable to damage.

The following changes can be observed in the auditory system 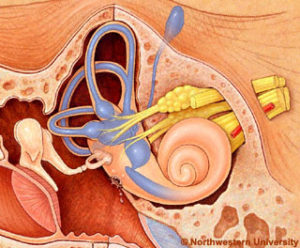 Disruption to the ear bone can cause conductive hearing loss

s. This means hearing is better through bones than air.

It is due to problems with the ear canal, eardrums, or middle ear and its little bones.

It is also known as Sensorineural Hearing Loss (SNHL).

In this hearing situation, hearing is affected due to head trauma but not vestibular function.

The neural hearing loss is due to damage to the 8th nerve, such as due to temporal bone fracture, or traction on the nerve between the lip of the IAC and brain.

The central hearing loss is due to damage to the brain and it is rare.

The “Central” part of a hearing deficit that does not respond to hearing aids, but rather should be treated to aimed at optimizing their other communication abilities.

Thus whatever is the cause of head trauma it can affect the auditory system and lead to hearing loss. Thus proper diagnosis should be done so that the affected part is located and hearing loss can be treated better.