Autism is a developmental disability that affects person communication skills and the way they relate to people. Autism is a spectrum condition.

It means that, while all people with autism share certain difficulties, their condition will affect them in different ways. Autism Facts And Statistics can help to learn more about it.

If you need any assistance or have a question about Autism, you can consult our HearingSol experts with your problem, feel free to call us on +91-9899437202. We are always here to help you.

Generally, Autism appears before the age of a 3rd year. Therefore, it impacts the normal development of the child’s brain in the areas of social interaction, communication skills, and cognitive function.

Typically have difficulties in verbal and nonverbal communication, social interactions, and leisure or play activities.

It also includes such as asthma, allergies, digestive disorders, epilepsy, persistent viral infections, sleep disorders, and so on. Let’s find out autism facts and statistics

Statistics of autism are as follows-

Studies have found that autism is more prevalent in developed countries like USA, Japan, UK, etc. Let us track autism around the world.

According to Statista 2018, countries with the highest autism rate are- 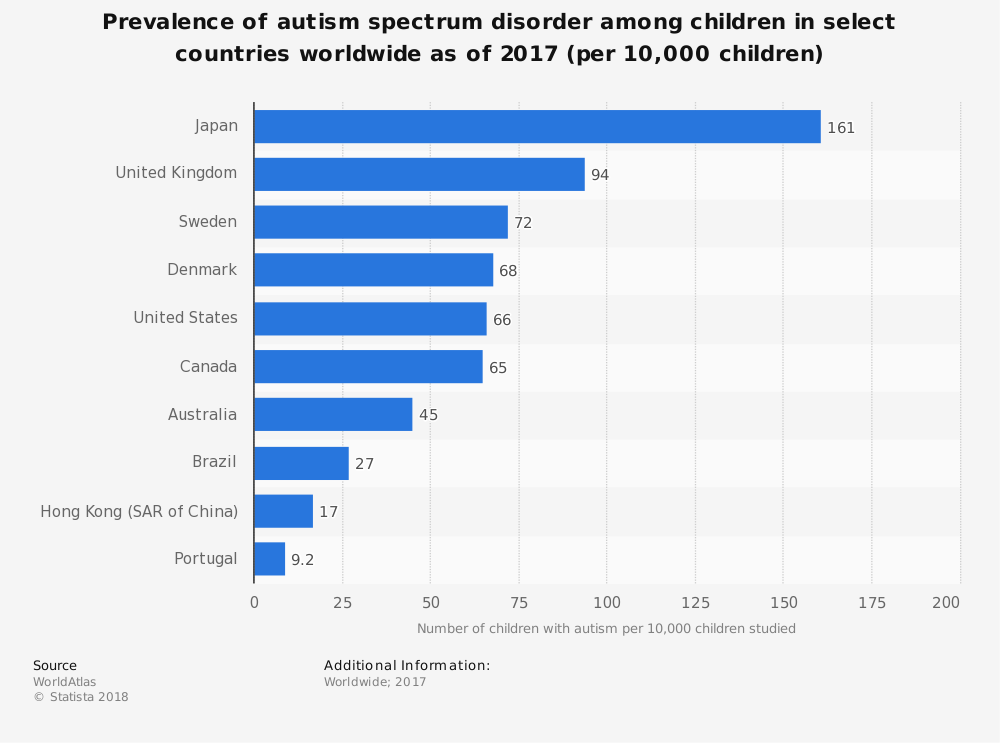 According to the Center for Disease Control findings, around 168 in 10,000 American children have autism.

According to New Scientist, the rate of autism in Japan is up to 161 autism cases per 10,000. A controversy arose in the 1990s and 2000s in Japan about the MMR (measles, mumps, rubella) vaccine to be the cause of autism. As a result, the government dropped the requirement for MMR vaccination. Despite the lack of vaccination, the rate of autism didn’t decrease. This shows no correlation between vaccination and autism.

Canada conducted its own autism studies by the Center for Disease Control. This study found that the rate is 152 per 10,000.

According to NHS, around 1 case of autism spectrum condition per 100 children is found in the UK. Nearly five times as many males have autism as compared to females.

According to a study conducted by Dublin City University, the autism rate in France is around 100 per 10,000. Like other entries in the list, it has been difficult to pinpoint an exact number of children who are affected by autism as the diagnosis is complex.

Countries with the lowest percentage of people with autism are Germany, Italy, France, and The Netherlands.

Each child with autism is unique. That is why there is no one answer about what factors might influence that prognosis over the child’s lifetime.

In some cases, children do recover and in some cases, this happens after intensive treatment but not always. According to some experts, the following factors suggest a better prognosis:

Today’s prognosis for autism has far improved over what it was 30 years ago. A nurturing environment at home, at school, and later in job, training and at work will help people with autism to continue to learn and to develop throughout their lives.

If you need any assistance or have a question about Autism, you can consult our HearingSol experts with your problem, feel free to call us on +91-9899437202. We are always here to help you.