HomeFAQsHow did people communicate without any device if they couldn’t speak?

How did people communicate without any device if they couldn’t speak?

In a world, there are various communities of deaf people. In these communities, sign language has developed, and are at the core of local deaf cultures. Although deaf and hard of hearing people use sign language.

If you need more information or you have a question regarding Sign Language, you can discuss it with our HearingSol healthcare professionals, just give us a call on +91-9899437202. We are always here to help you.

The deaf-blind alphabet is the way to communicate with the people who cannot speak or see. Different ways to carry the conversation.

Types of the Deaf-blind alphabet

It is a type of sign language in which a person with a disability read the signs of hands of another person. It can be read via touch and sight.

It is a type of sign in which a person who is deafblind reads the signs of another person. So, communicator uses signs of British Sign language using his own hands.

Block is the easiest deafblind language to express yourself. They are based on the English letter and drawn on the palm of the deafblind person. 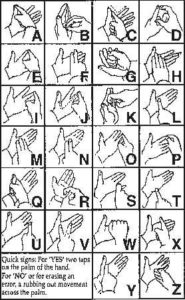 Many people use their hands, faces, bodies to communicate, and facial expression to convey a speaker’s idea. And there are several different ways to do these activities through sign language. Sign language helps in reducing the difficulty of people who communicate without any device if they couldn’t speak.

Linguists consider both language sign and spoken are natural language. Sign language should not be confused with body language or non-verbal communication.

What is deaf culture?

Deaf Culture is a linguistic subculture in our society essential for a group of deaf people uniting through their language and also their Deafness.

It originally fought autism and other ways that deaf people were discriminated against for their inability to hear sounds as others (hearing people) do, but now it is a symbol for unity and pride among deaf people.

Deaf people are treated using various methods. Which include hearing aids, sign language, subtitles, and many other things. Hearing aids are a small machine that helps deaf people to hear louder and clearer. When hearing loss individual face problem in hearing. Then hearing aid help them in improving their hearing or deafness by amplifying soft sounds. It won’t make you hearing perfect but it makes sound clear. A hearing aid has five component and packed into a single unit or box and developed in different styles such as for in-the-ear and behind the ear. People use these devices to hear properly in any environment.