Today, whether it’s the home, market, school, or any other organization, the most important life skill, is communication. Even if you are hard of hearing people. Phones For Hearing Impaired can help you to communicate better with others.

We can communicate in many ways like written communication, face to face, non-verbal, etc. One of the primary types of communication is telephonic communication. People use a telephone to exchange thoughts with each other.

You can purchase the latest hearing aids at a fair price through HearingSol, If you need any assistance or you have a query regarding Deaf People or Hearing Loss, feel free to call us at +91-9899437202. We are always here to help you.

Have you ever thought that you can’t interpret the expressions, reactions of another party on the phone? Thus you face many problems like miscommunication.

But what about those who have hearing loss problems? They suffer a lot while communicating through phones.

Now there is no need to worry if you are suffering from hearing loss. The reason behind this is the technology that has invented an excellent tool that enables hearing-impaired people to talk and share information over telephones.

In this article, we will review the best phones for hearing impaired available in the market. These amplified telephones are built in with technology.

Why Is Telephone Communication Difficult For Hearing Impaired People?

We use only one ear to listen in telephonic conversation but our brain is designed in a manner that it needs both ears to enter a signal to understand speech easily.

But in a telephonic conversation, the signal is coming with one ear so it is difficult for the brain to understand speech.

Even people with normal hearing use visual clues like facial expression, lip reading to get those words that they do not get into verbal communication.

But in telephonic communication, this is totally unavailable option to get visual clues.

Every phone has different signals as they are not created equally. So the compatibility of every phone with listening aids differs.

Are These Phones Only For The Elderly?

The answer to this question is obviously No. The National Institute of Deafness and Communication Disorders (NIDCD) reports that the people of age group 20-59 have permanently damaged hearing.

And this ratio is true for more than 10% of people of this age group.

Do you want to know the reason behind this? It is due to their lifestyle since they like to spend more time in a noisy environment.

50% of people over the age of 60 are prone to hearing loss. NIDCD supports new technologies for the treatment of hearing loss. This is true for all age groups not only for elders.

Which Type Of Telephone Is Suitable For You?

The base of the hearing loss telephone is amplification. There are different levels of telephone amplifiers. They are helpful in boosting the sound and improving the quality of communication.

Soon we are going to discuss the top 7 hearing impaired telephones. They are designed in such a way that they can filter background noise.

Following are some conditions of hearing loss:

If you have a mild hearing loss, you may find it difficult in 100% conversation. Such people are unable to decipher letters like ‘f’, ‘Th’ while chatting with someone.  People with mild hearing loss can hear speech between 26 and 40 decibels.

If you are using hearing aids on a regular basis to hear sounds around you, then you might be suffering from severe hearing loss. The range of this level is 70-90 decibels. Such people get benefits from high-amplification telephones.

The best solution to improve the phone for hearing loss people is to increase its volume to be audible for them. On these telephones, the loudness is adjustable to the maximum of about 100-150 decibels.

Microphone volume is quite adjustable too even in the case when one deaf person talks to another. There is a button to boost up the sound temporarily especially using call duration.

They contain a microphone on one side and a loudspeaker on the other side. The middle section contains a battery-powered amplifier unit.

An inline amplifier(little box) fits between the handset and the base unit. So they interrupt and boost the current going from base to loudspeaker of a handset.

These phones have vibrating alert buzzers and flashing light operators to alert them for calls. They have LCD displays with caller identification that will check the current call number against the address book.

It will help a deaf person to decide whether to receive a call or not.

This telephone was designed by Geemarc for hearing impaired people. It contains extra-large buttons for visual impairments.

These phones are similar to normal phones but the additional features of an amplifier are added to it. The amplifiers increase the sound clarity.

And even sometimes increases the ring volume also. This means that it can be heard from a distance also.

Some of the phones also allow the feature of tone equalization that means it enables us to listen to those peaky high pitches which are hard to make out.

It is effective for mild, moderate, and severe hearing loss person. It does not increase any hearing impairment.

In this, a screen is attached to the phone. Word by word is written on the screen whatever has been said by the other party. This is just similar to the conventional phone. The only difference is that it has a screen along with it.

It works in a similar manner as a normal phone. But on this phone, the screen displays the live conversation in written text.

As per National Associate For the Deaf this phone is best for deaf people. Sprint CapTel and CaptionCall are the best examples of captioned phones.

The basic requirement for the captioned telephones are:-

TTY stands for Text Telephones. It is the first telecommunication relay for impaired peoples. This technology exists in today’s time also but Captioning phones are far superior to them. 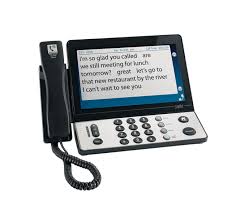 Using this, a hearing loss person can communicate with the other person using text format. The TTY operator writes all the sentences whatever has been said to the hearing-impaired person so that the person can read the typed message on his TTY device and get the information easily.

After that, the person gives his response back by writing in the device and then the TTY operator read aloud the whole written text and thus the listener listens to the conversation over his phone.

Another form of TTY is Voice Carry Over (VCO). In this, the VCO user can give a response back to its own voice rather than writing up the response.

It is very similar to the captioned phones but the only difference is the VCO user cannot listen to the voice of another party. This functioning allows either text or voice only once at a time.

This service is an internet-based service. In this service, the hearing loss person communicates with the operator first with video conferencing equipment with the use of American Sign Language. 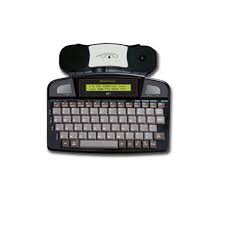 Then the speaker speaks the called party and responds back to the user by American Sign Language.

Some best VRS online services and applications are:-

Now mostly digitally listening aids come with the feature of the specific program that can be used with phones. A Compatible telephone must need to acquire this feature of hearing aids.

The benefit of this special feature is that it can delete the interface between the aid microphone and phone. It also helps to reduce the background noise while having a conversation on the phone.

This is the advanced programming in the hearing device. In this whenever a phone is picked to one listening aid the phone signal is getting by the aid via telecoil or microphone than the other listening aid on the other ear automatically gets signal by wireless streaming.

As long as this feature is available in the hearing device it can be used with both a landline or mobile phone.

It improves the speech intelligibility of the phone and it also reduces the background noise. Most of the listening aid manufacturers enhance this advance feature in their aids.

In this smart technology, the intermediate device between hearing aids and telephones is not necessary.

To allow phone conversation, a cell phone directly syncs with the aids. Thus it can be streamed directly without using hands to both the hearing device.

These hearing impaired telephones have shown a ray of hope of hearing loss people. Built-in amplifier and Bluetooth in hearing aids receive signals directly from the telephone without interference.

These hearing impaired phones are helpful only if you can detect them ringing. It reduces the chances of depression because of the ability to talk over phones. To get any enquiry or further details, dial our toll-free number +91-9899437202.